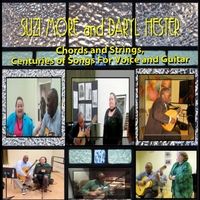 From the recording Chords and Strings, Centuries of Songs for Voice and Guitar

5. Come away death, 6. O mistress mine, 7. I am Gone Sir, 8.When that I was and a tiny little boy
from "Four Songs of Twelfth NIght" by Garth Baxter
Garth Baxter (b 1946) Earned music degrees from Pepperdine University and California State University at Northridge. Studied composition with Robert Hall Lewis, Joseph Wagner, and William Thornton. His compositions for chorus, orchestra, symphonic band, piano, organ, flute, voice, and guitar, as well as other instrumental combinations, have been performed throughout the world. His works are published by Columbia Music Company, ALRY Publications, Les Productions D.OZ, Voices of Training, Guitar Chamber Music Press and Mel Bay Publications. Has received numerous awards, commissions and honors for his music. His song cycle, From the Heart: Three American Women (Columbia Music Company) was the topic of a doctoral dissertation. Mr. Baxter recently completed the opera, Lily, with librettist Lisa VanAuken. The CD Katherine Keem Sings Songs and Arias by Garth Baxter was released in 2014 by Centaur Records. He is on the faculty of McDaniel College in Westminster,

6. O mistress mine (Four Songs of 12th Night Garth Baxter)
O mistress mine where are you roaming? O stay and hear your true loves coming
That can sing both high and low trip no further pretty sweeting
Journey's end in lover's meeting Ev'ry wise man's son doth know
What is love? tis not here after Present mirth hath present laughter.
What's to come is still unsure, in delay, there lies no plenty.
Then come kiss me sweet and twenty youth's a stuff will not endure.